Learn the latest on all things Farmers® 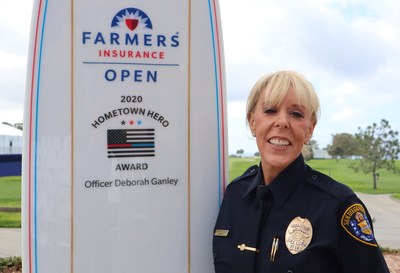 Known as "Officer Debbie," Ganley has served on the force for more than 18 years working on special events, such as the Farmers Insurance Open where she's been the lead police officer at Torrey Pines since 2002. Officer Ganley's passion for local events has prompted her appointment as lead officer for other notable San Diego events including the Holiday Bowl Parade, 2008 U.S. Open and more.

"I am truly honored to receive the Farmers Insurance Hometown Hero Award. I've had the tremendous opportunity to work with dedicated officers and other first responders who have served at the tournament over the last few decades, and I want to thank them for making this an unforgettable experience," said Officer Ganley. "I'm grateful to represent the San Diego Police Department and for organizations like Farmers Insurance and The Century Club who help support first responders."

Farmers presented Officer Ganley, who is retiring later this year, with a replica of the surfboard trophy the winner of Farmers Insurance Open receives as part of the Hometown Hero Award ceremony.

"We're thrilled to present 'Officer Debbie' with the inaugural Farmers Insurance Hometown Hero Award as a way to thank her for everything she's done at the Farmers Insurance Open and throughout the San Diego community," said Leesa Eichberger, Head of Brand Marketing for Farmers. "This award is the first of many ways Farmers will be recognizing first responders during this year's tournament. We want to say 'thank you' to those who dedicate their lives to serving their communities, and we'd like to extend an extra special thank you to 'Officer Debbie.'"

This year's Farmers Insurance Open will host more than 1,000 first responders as part of its celebration of those who continue to selflessly serve our communities. The 14th hole on the South Course will feature a special pin flag, tee signage and tee markers dedicated to first responders, and Farmers will donate $1,000 to the San Diego Fire Rescue and Police Foundations for each birdie made at the 14th hole during competition rounds.

Guests will also have a chance to say "thank you" with a special Farmers Insurance Open hat designed to honor first responders. Proceeds from the hat sales, which will be available for purchase at the Torrey Pines Pro Shop, will be donated to local first responder nonprofits such as the San Diego Fire Rescue Foundation and San Diego Police Foundation.

More information about the Farmers Insurance Open®, including the location of the Pro Shop carrying the first responder hats, can be found at www.farmersinsuranceopen.com.

ABOUT FARMERS INSURANCE
"Farmers Insurance®" and "Farmers®" are tradenames for a group of insurers providing insurance for automobiles, homes and small businesses and a wide range of other insurance and financial services and products. Farmers Insurance is proud to serve more than 10 million households with over 19 million individual policies nationally through the efforts of more than 48,000 exclusive and independent agents and approximately 21,000 employees. Farmers Insurance Exchange, the largest of the three primary insurers that are part of the Farmers Insurance Group of Companies®, is recognized as one of the largest U.S. companies on the 2009 Fortune 500 list. 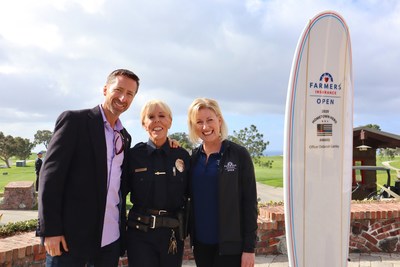 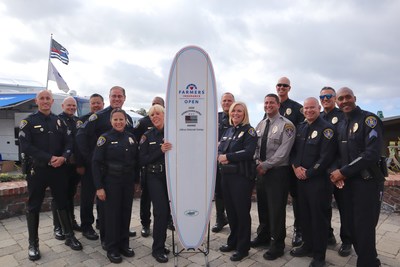 Add us on
Linkedin

Each insurer has sole financial responsibility for its own insurance. List of all insurers at farmers.com. Not all insurers are authorized in all states. Not all products, coverages, features and discounts are available in every state and may vary by state. Restrictions, exclusions, limits, and conditions apply. See agent for details.